Bohr’s Model of Atom and Equation

Background:  Recall the atom is made of a positive nucleus center and surrounding shells which house the negative electrons. Electrons closest to the nucleus, therefore, feel the positive charge much more than electron further away. This is very similar to a magnet. The closer two magnets are to one another, the greater their attraction and the more difficult it is to pull them apart. The farther away they get, the less the attractive force and the more readily they separate.

Electrons on the first shell (shell #1 in red) are closest to the nucleus and therefore under the greater control of the nucleus’s positive charge. They are held in place very tightly and lack considerable energy to move compared to other electrons.

Electrons on the last shell (shell #4 in yellow) are farthest from the nucleus and much less under its influence. They have more energy      to move.

That is why electrons on the outermost or valence shell are the ones most susceptible to be lost or added.

Since electrons are integral in chemical reactions, learning more about their behavior–how they move from one shell to another—helps in understanding what that behavior can tell us about their reactivity. Energy and stability are priorities for all atoms so they will arrange or rearrange their electrons in such a configuration as to achieve the most stable energy level.

Example: What is the energy of a electron transitioning from n= 3 to n= 1? Is this electron emitting or absorbing energy? Explain. 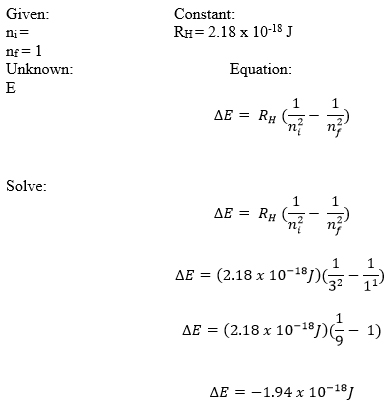 Energy was emitted because the energy value has a negative sign and electrons moved from a higher energy (n= 3) to lower energy level (n =1). Therefore, energy had to be lost.