Transition metal are a bit different because they include the d subshell which has a smaller “n” value. Typically this leads to combining or hybridization of orbitals of various subshells to stabilize the atom.

Visually this is equivalent to:

Why so much space for so few electrons?

This only makes sense if the 3rd shell was already full with 10 electrons, (d can hold up to 10 electrons!) and there was a need to open a 4th shell to hold the remaining 2 electrons. But this is not the case! Opening new shells is done if necessary!

The 3rd shell has a mere 3 electrons, with plenty of more room to hold the remaining 2 electrons for a total of 5. Opening the 4th shell, which is higher in energy, without first filling the 3rd shell, of lower energy, does not make sense when considering energy conservation and stability for the atom.

Lower energy is preferred as it stabilizes the atom.

The solution is to combine the “d” and “s” subshells to form hybrid orbitals that hold all 5 electrons.

The new electron configuration would be  [Ar] 3d5.

Why do this? It eliminates the 4th shell by combining all 5 electrons into the 3rd. This helps to reduce the energy level of the atom and stabilize it by only using shells that are needed.

It is like going to someone’s home and being offered a soda, taking just a sip, then opening another can before finishing the first. It doesn’t make sense because it is wasteful. Same goes for opening a new energy shell when the previous one has not been completely filled.

Visually this is equivalent to: 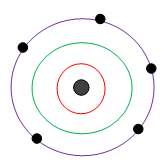