Just like a family tree, the main trunk expands to give way to branches which divide even more to reveal connections of kinship.

We will use the same philosophy to aid in the naming of binary compounds. “Climb” or follow the branches as they lead to you to identify the type of compound you have. Then use the corresponding naming rule to name the compound. Follow these guidelines or you may find yourself out on a limb!

Begin with asking: Is this compound ionic or molecular in nature? Then follow that branch to find subcategories stem from it.

Recall that ionic compounds are easily identified by a metal + nonmetal pairing while molecular compounds contain two nonmetals (including those pesky polyatomic ions). 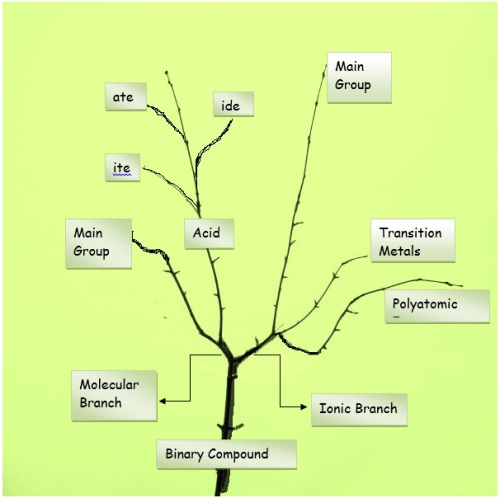 3. Acids
Name the compound as a molecular compound. Then use the following guide to change it to its acidic name:

Name the compound using the appropriate naming rules then add the Greek prefix to indicate the number of water molecules, then the word “hydrate.”

Practice Exercises and Answers: Write the names of the following formulas: